It's starts with the bread.  I know a lot of recipes call for dried bread cubes or day-old bread.  I don't like to start with dried bread because you're just working to re-hydrate it.  If you start with good bread you'll have a better tasting stuffing.  I like a sandwich type whole wheat bread.  Pretty much if you like the taste of the bread you will like the stuffing - sourdough makes a great option also.  I do toast it a little bit to give me time to mix the wet ingredients.  You can use pre-made stuffing croutons, it is just personal preference.  You'll need about 4 cups of bread cubes. 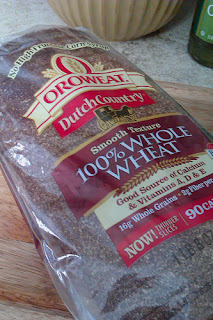 I cut the whole loaf into cubes - it's the season for the electric knife.  I got one 31 years ago as a wedding present and it pretty much only comes out for turkey season. 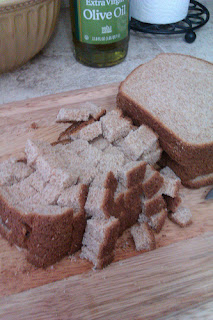 Place the bread on a large cookie sheet or jelly roll pan and toast in a 350 degree while you prepare the veggies.
I use only celery and onion for my sage stuffing along with the spices, I added apples one year and my daughter was pretty adamant that they had no place in the stuffing she was used to having every year. : )
Like with many recipes this is a great time to use the tops of the celery.  From one bunch of celery I use the less mature inner stalks, the tops of the other stalks and one or two green stalks, depending on how much you get from chopping the tops. One large outer rib will give you about 1/2 cup chopped. 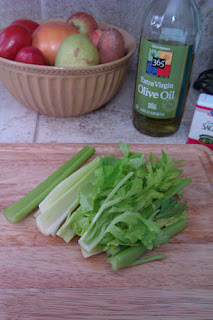 I end up with a full 'one cup' in a glass measuring cup. 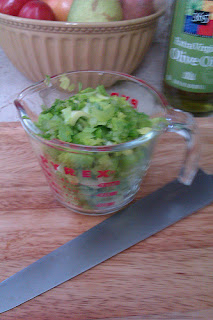 Chop one small onion, or a leek, or scallions. You will want about 1/2 to 2/3 cup of chopped onion. 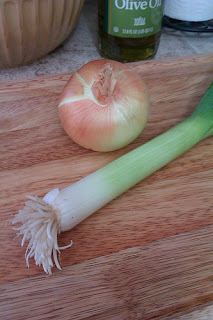 In a heavy skillet melt 6 tablespoons of butter - you can also use a mix of olive oil and butter.  Add the chopped celery and onion, generously salt and pepper.  Add 2 tablespoons of crushed dried sage leaves - I like a robust sage taste and use 3 tablespoons.  If using fresh sage double the amount.  I also add a heaping tablespoon of parsley - but it is optional, the great taste of this stuffing comes from the sage.  It looks brown in the picture but it is more green in color and you know you have the right amount by the smell of sage and the butter turning green after the addition of the herbs. 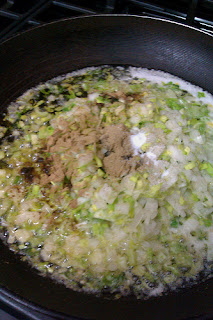 Saute until the onions begin to turn translucent.  Pull the bread from the oven, add it to a large mixing bowl.  Pour the veggie mixture over the bread and then pour 8 ounces of chicken broth.  Mix quickly and thoroughly.  Pour the stuffing into a greased casserole dish, lightly press down.  Cook uncovered in 350 degree oven for 35 to 45 minutes depending upon the depth of your casserole dish.  This year at Thanksgiving I experimented cooked the stuffing in the crockpot.  It came out very nice, but I do like the crunchy crust from cooking in the oven.
Enjoy your holiday cooking. 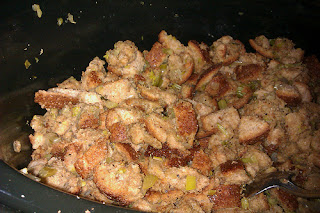 Posted by KatesBlog at 3:40 PM