Grandma Would Be Happy

And if not I sure am. I finally completed the top to my friend's extra long quilt that her grandma made. Apparently Grandpa was 6' 6" and she need a custom sized bed covering. Because it was tied there was damage to over 2/3 of the large plain squares. And many of the smaller patches had just fallen apart.  The ties were too far apart for all the use the quilt saw, and the length of the actual tie was long, rather than the points of entry being close together. 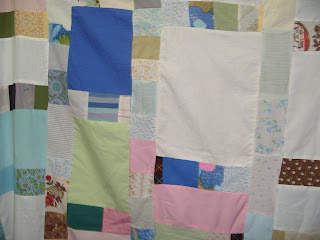 She used sheets for most of the larger blocks and that made a challenge to rip seams as the thread count is so much higher than the surrounding clothing scraps. 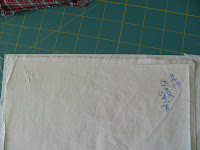 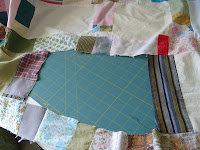 After I had the piece removed I would use it to cut a new piece and sew it back in.  Originally I ripped two seams the width of the quilt to get it into manageable pieces.  The challenge with the original blocks is that they were not always square, but the template idea worked well. 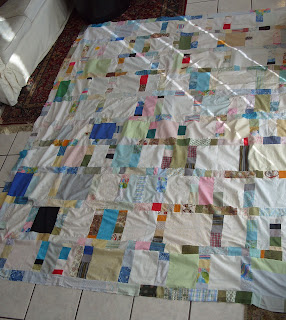 I laid it out on the family room floor so I could take a picture from the top of the stairs, it is 8' 6" - yikes!  I  am taking to church next week and we are going to spread out the backing - which grandma used a old pink blanket and surrounded it with a sheet that comes up from the back to wrap the front as binding.  I will let you know how the tying goes - I could definately use an old fashioned quilt group for this one.
Posted by KatesBlog at 2:32 PM 6 comments: 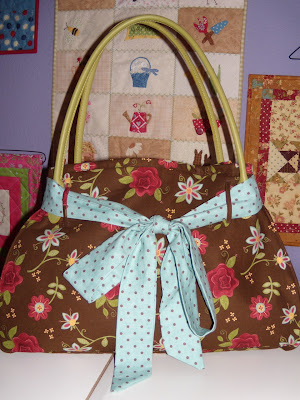 My finished bag with a blue sash, I also have fabric for a red sash and a green one, both of which may complement the bag better but I really like the freshness of the blue. 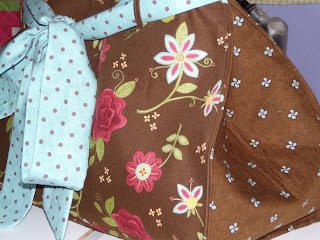 A picture of the side detail.  Carol added topstitching to the side with gives them extra definition, nice touch.
Posted by KatesBlog at 7:03 AM 9 comments:

Gotta Stop and Smell the Chocolate 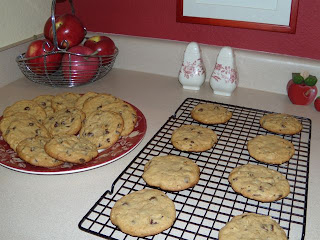 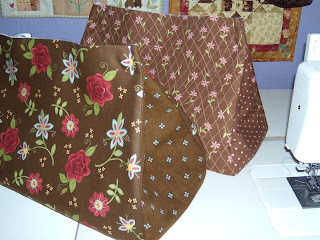 Girls can't just sew all day, sometimes you gotta stop for chocolate.  While I was still in Arizona with Carol we stopped to bake cookies, mmmmm, they didn't last long and here is our Bella bags in progress.  I am home now and back to work - had a great vacation.  I will post a finished Bella bag pic tonight.
Posted by KatesBlog at 10:42 AM 3 comments:

My Son, the Soldier 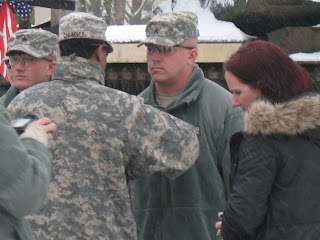 My oldest son, David, receiving his battlefield promotion to Sergeant in Germany - earned during his time in Iraq.  He heads home to Colorado Saturday, February 6 to move his family to Texas.  I am so excited that he will be stationed back in the states.  If you have a comment for David I will forward it to him.  We all salute you David, and your willingness to defend your family and our country. 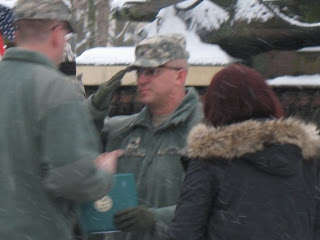